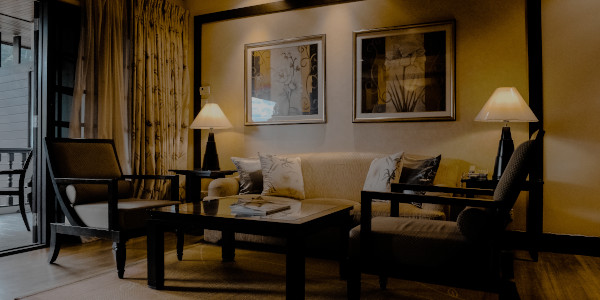 When thinking about interior design, words like creativity and flair immediately spring to mind – but many would be surprised to find there is a degree of science involved. Professional interior designers will usually follow a set of informal “rules”, based on specific interior design principles and elements. These interior design elements include space, line, forms, light, colour, texture and pattern; and keeping them balanced is the key to creating an aesthetically pleasing interior.
In addition to enhancing the appearance of a room, getting these elements to work together in harmony will also bring an increased functionality. To start, an interior designer will assess the room according to these interior design elements, and then use them to disguise or enhance the various features and flaws of the space. As a minimum, the following seven elements should always be considered in the creation of any interior.

The foundation of an interior, space is a fundamental concept to understand, ensuring you’re best equipped to take advantage of what is available to you. The available  ‘space’ usually can’t be easily changed (though sometimes a designer may have the luxury of doing so), so you need to work with what you have within the physical boundaries of the room.

This balance will be influenced by the client’s needs in the specific area/room and its required functionality. For example, negative space is required for traffic paths. It is also crucial to consider the scale and size of the furniture and objects placed in a room, as this can be used to make the space appear larger or smaller given the desired outcome. A tall object such as a book case can give the illusion of height.

Different design styles will lend themselves to different uses of space – for example, a minimalist design will have far more negative space than your average eclectic design. However, no matter what your design brief, how you use and balance the space available to you can be the difference between hitting the mark with your design concept or missing out on your next commission.

Horizontal, vertical and dynamic lines help to shape a room and guide the eye.  Creating lines using the room’s furnishings and structural design can form harmony, unity and contrast.

Horizontal lines, created by tables and other surfaces, give a sense of stability, formality and efficiency. Interior designers highlight horizontal lines to make a room appear wider and longer, and to draw the eye to a focal point. But be careful, overemphasis of horizontal lines has the ability to make the space seem boring and uninspired.

Vertical lines, created by features such as windows and doorways, evoke feelings of freedom and strength. On a functional level, accentuating vertical lines often gives the illusion of a room being taller. Often suited to use in dining rooms, entries and offices, vertical lines must be incorporated wisely so as not to leave inhabitants feeling uneasy.

Dynamic lines refer to diagonal, zigzag or curved lines.  Such lines can be found in stairs, for example, and provide energy and movement. Stimulating to the eye, dynamic lines capture our attention longer. However, too many dynamic lines in one room can be distracting, and overpower horizontal or vertical lines.

Ideally, interior designers will strike a balance with the incorporation of different lines. This is typically done by selecting one dominant feature line, in accordance with the client’s brief and the desired feeling they wish to convey in the space.

Form is the shape of the room, as well as any objects within the room. In other words, it relates to the physical form of anything that is three dimensional.

Forms can usually be described as either geometric or natural.  Geometric refers to hard lines and square edges, often looking man-made, while natural relates to more organic forms that seem to be created by nature.  Forms can also be open – objects that can be looked into or closed – self-contained.

Another thing to take into consideration with form is the proportions and scale of the room compare to the objects being placed within it.  Adding forms of similar shapes can create harmony and balance, while adding too many differing shapes can have a confusing result. A space is typically more pleasing if the dominant form is repeated in minor objects throughout the room.

Natural or man-made light is a critical aspect of any space.  Without it, all of the other elements would not be able to shine to their full potential. Light can be broken into the categories of task lighting (defined purpose), accent lighting (emphasising objects) and mood lighting (adding ambience).

When considering lighting, it is important to address the activities that will be undertaken in the space. Both the quality and quantity should be assessed here. For example, an office will require bright lighting so that the workers can see clearly and act alert.  On the other hand, living room lighting can be applied with a softer touch. Applying a dimmer has the ability to make a space much more versatile. Natural lighting should always be taken into consideration, and can be manipulated through clever placement of doors, windows and even mirrors.

Beyond its functional purpose, light has the ability to set the mood and atmosphere of a space while defining colour, line and texture. Plus, any good interior designer also knows that the lighting fixtures are a visual feature in themselves, which can add the right tough to any design.

Colour is a science all on its own, and is another extremely important element that interior designers master. It has the ability to create mood, define unity and alter the perception of how large or small a space is.

The psychology of colour shouldn’t be underestimated, and will be used to full advantage by any skilled interior designer.  Colour can evoke memories and stir emotions, stimulating a physical and psychological response in our bodies. For example, greens and blues entice calmness and are suited to bedrooms, whereas red entices appetite and therefore often features in kitchens.

When considering the colour of a room, first think about what the room will be used for and the activities that will occur in that space. Secondly, consider how both natural and artificial lighting will affect your selected colour across the day and night, given that light can alter our colour perception. Finally, consider the size of the space.  Interior designers will often incorporate lighter or brighter colours in smaller spaces to give the illusion of more space. Darker colours can give a powerful dimension to a larger space.

Texture refers to the tactile surface of an object or finish.  It’s an element that is often overlooked, but really does have the ability to bring a unique dimension to the room. Just like mixing colour and pattern, an interior designer mixes the textures within a space to give a subtle sense of depth. Think glossy, coarse, smooth… From furniture to accessories to fabric, texture has the ability to add interest and detail, making it visually pleasing to the eye. In essence, it gives a room feeling.

Texture comes in two forms – visual texture and actual texture. Visual texture refers to texture that is perceived by the eye. In other words, this is the impression of texture one gets by only viewing an object.  This effect is usually found in the form of pattern. Actual or tactile textures can be seen or felt and has 3D characteristics. For example, a fluffy, colourful cushion can be appreciated not only with the eye but also with touch.

Generally, if there is a sense of something missing in a room, a good interior designer will be able to distinguish that it will be due to lack of texture. Texture plays a part in every object selected for a room, and therefore is best managed with careful consideration from the ground up.  The placement of each object in comparison to the texture of the object beside it will also add emphasis and contrast to the finished design.

Paired with colour, pattern offers a similar use to texture in that it can add appeal to a room. A pattern is created by the use a repetitive design and can be found in wallpaper, soft furnishings, rugs and fabrics. Patterns come in various types, such as stripes, geometric, pictorial, organic, motif and animal prints.

When implementing pattern, it’s best to firstly consider the size and style of a room. Introducing pattern in a small room should be done sparingly, to avoid overwhelming the space. However, as discussed in the element of line, patterns that create vertical or horizontal lines can be used to give a heightened sense of space. Complex patterns made up of contrasting colours and lines can liven up a room, however they are best used in the form of a feature wall. Large scale patterns can flourish in a large space and become a distinct focal point to the room.

In regards to style, it’s vital to know what category the pattern falls into to ensure that the essence of the room is maintained. For example, for traditionally styled rooms, incorporate organic, floral prints. For a contemporary touch, geometric and abstract prints should be experimented with.

Fun to use and with an element of functionality, patterns can bring a room to life. As a rule of thumb however, it’s best to include a maximum of three patterns, all drawing from the same colour scheme. 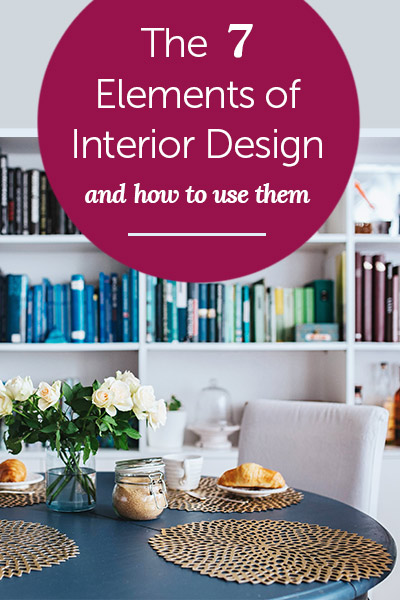 Love Your Boudoir – 5 tips to make you never leave your room!

Interior Designer vs Decorator – Which one suits you?

How To Win In 25 Words Or Less

Improve Your Market Value by Taking an Interior Design Course

The 7 Elements of Interior Design and How To Use Them

The Interior Design Academy is unaffected by COVID-19 shutdowns and restrictions.

As a 100% online education provider, it’s still business as usual here for us at the Academy. Student services coordinators and tutors are working remotely and so you can expect the same high level of service as always. Please reach out, we'll be happy to assist you.

Stay safe and healthy during these difficult times.